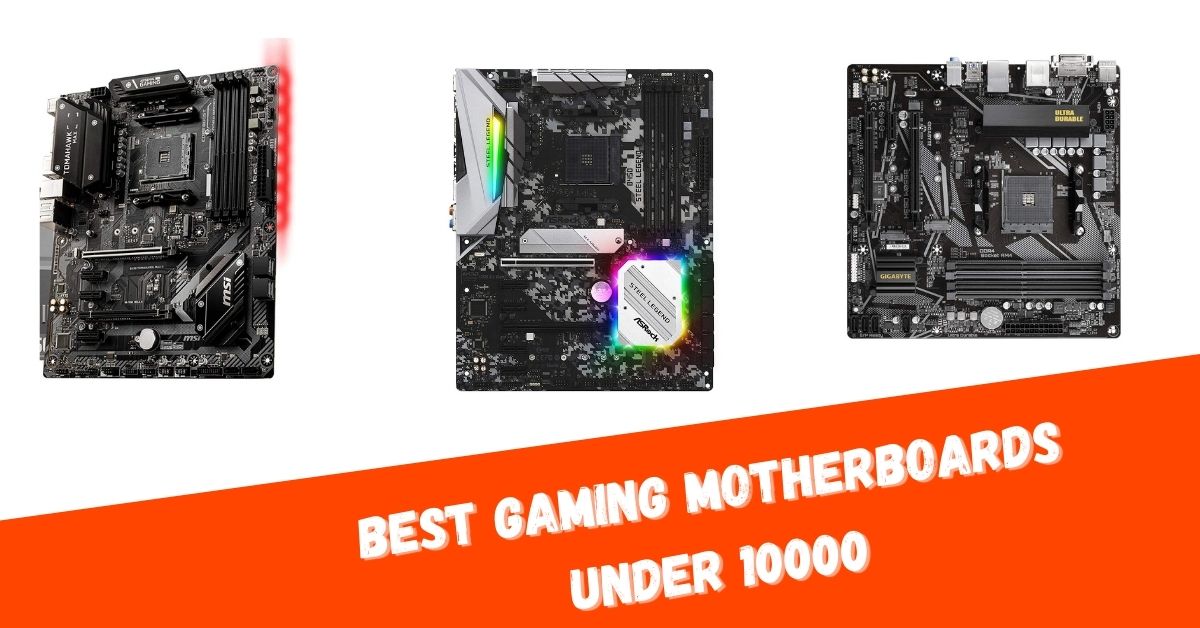 Hello friends how are you guys hope all of you will be good and safe, guise if you say to build a gaming pc, in which you can enjoy all the games well and your budget is not too much, but a to build a good gaming pc, you have to take a high-quality motherboard,

and that’s why you are also searching for the motherboard, and your budget is around 10000, then stay with this post today because today we are going to talk about Best Motherboard Under 10000. In this list, we include the top 5 best gaming motherboards under 10000.

Common things in all Best gaming motherboard under 10000

So let’s start the list of Best motherboards under 10000

Friends, if your budget is around 5000, and if the app can not spend more than that, then this motherboard is for you because it comes at the price point of 5000, this motherboard comes from MSI whose name is MSI H410M PRO-VH is mATX,

and it is a very good motherboard for budget PC build, its color is black, and the design is also good, it does not have RGB lights, because it is a budget PC motherboard, it has LGA 1200 Socket has been given, which supports 10th Gen Intel Core processors,

Friends, the clock speed of this gaming motherboard is 2933 MHz, which is very good for this budget, and it comes with 64 GB storage capacity, in this, you can also use Core i5-10400, which is a very good thing. , and it will help a lot in budget PC build, its maximum memory supported (RAM) capacity is 16 GB,

which is enough to use, its Graphics Card Interface (PCI–e) is so that you can get good quality graphics card in it. And it comes with DDR4 Memory Technology which improves your PC performance and speed as well.

It is also very lightweight so that its weight is only 600 grams, and you can also use 32 GB/s for ultra-fast SSD, which will make your PC’s read, and write speed very fast, turn it on/off A button has been given to do this, and some very important ports of connectivity like,

USB 3.2 Gen, HDMI port, have been given, which are not ports, you can also put them, else all the necessary ports have been given in it. Yes, its chipset type is 410, and WiFi is not given in it, but you can put WiFi in it.

Review of the ASUS Prime H510M-A gaming motherboard under 10000

Friends, Asus is such a good and big brand, you all know that, and the quality of its gaming gadgets is very good, and if you also like Asus’s products, then this gaming motherboard is for you only. Because it comes from Asus, whose name is ASUS Prime H510M-A,

and its rating is very good, aluminum has been used in its design so that the processor of the PC will not heat much, and performance It would be very good, in this Asus motherboard Intel’s latest Intel Socket LGA1200 is used so you can use any intel 11th Gen Intel Core processors & 10th, Gen Intel Core as well which is very good for intel processor users

Its clock speed is 3200MHz, which is very fast, and it can use up to 64GB DDR4 RAM so that any game can run smoothly, without any lag and you can also do video-editing, Asus has used the next–gen technology of PCIe 4.0 M.2 slot in this motherboard,

which gives a very fast speed of 32Gbps, it also supports full RGB lighting, which you can also control, due to which its look Turns out to be very good and OSM at night mood, and also has Intel WiFi 5, which is good for wireless connectivity

Its weight is only 700 grams, which is very lightweight, due to which the gaming puck will not weigh much, and it has a lot of ports, such as Intel 1 Gb Ethernet, DisplayPort, HDMI, D-Sub, USB 3.2 Gen 1 Type-A, SATA 6 Gbps, and AURA Addressable Gen 2 Handers so that connectivity key is not going to be a problem,

its Chipset type is Intel H510, and Graphics Card Interface is PCI-E, in this, you can Windows Operating System, which all gamers use and this is a very good operating system for Intel processors.

Review of the ASRock B450 gaming motherboard under 10000

Friends, if you want to make the look of your gaming puck very good, then you can buy this gaming motherboard, which is named ASRock B450, its look and design are very good, and metal has been used to make it, and to improve its look and more,

RGB lights have also been used in it, which you can fully control, it is made for Ryzen processors because its processor slot is an AMD AM4 socket so that you can use AMD 3rd Generation Ryzen, AMD can do 2nd Generation Ryzen with this motherboard.

Its color combination is also very good, and its Chipset type is AMD B450 and supports DDR4 RAM type so that you can put up to 64 GB of RAM in it, and enough RAM is enough to run any application, Its clock speed is 45 GHz which is very fast,

friends, it has been given Bluetooth for wireless connectivity, which is a very good thing and to have an AMD processor, you will have to use the graphics card in it to manage your PC display and for this, it has graphics card is also supported which capacity was not mentioned.

It requires 125 Watts to run, and it has a lot of ports like 6 SATA3, 1 Ultra M.2 PCIe Gen3 x4, 1 M.2 PCIe Gen3 x2 SATA3, HDMI, display port, with which you will get better connectivity. There will be no problem, and 7.1 CH HD Audio (Realtek ALC892 Audio Codec) is also given, for audio, SSD can also be installed in it, which makes its speed up to 32gbps, which is very fast speed, data paring For.

Review of the GIGABYTE B550M DS3H gaming motherboard under 10000

Friends, this gaming motherboard comes from Gigabyte, whose name is GIGABYTE B550M DS3H, and it is a very good gaming motherboard, with this you can make gaming or any heavy video–editing setup, it is strong, and its weight is only 630 grams

so that the weight of your gaming PC will not be much, aluminum has also been used in its design, due to which it remains very cool, and also makes gaming performance very good, it also consumes very little power. Yes, many features have been given in it.

Friends, this is also made for AMD’s processor, and therefore it has been given an A4 socket, which supports AMD’s 3rd Gen AMD Ryzen processors, which is a very good thing, its Memory Clock speed is 3600 MHz which is very fast, and you can put up to 128 GB of RAM in it,

because its memory storage capacity is 128 when, which is a lot, and the RAM type can also be DDR4, it supports it, it does not have RGB lights. is given, and a button has also been given to control it like off/on and for the wireless connectivity, it has the support of WiFi.

It has Dual Ultra-Fast NVMe PCIe 4.0/3.0 M.2 connectors, in which you can put SSD, and its speed can go up to 48gbps, which is very fast and enough, its Graphics Card Interface is PCI–e Which you can also put a good quality graphics card in it,

Review of the MSI B450 Tomahawk MAX gaming motherboard under 10000

you will know later, the rest it is on the side of MSI brand Comes from one of the biggest and trusted brands of gaming gadgets, it supports RGB lights, and its build quality is also very good, metal has been used to make it, so that it can keep very cool, to the processor, which will make the performance good

Many features have been given in it, as its clock speed is 4133MHz, which is quite fast, and it is also made for AMD Ryzen processors, which are the best processors, for gaming, it has been given Socket A4. , and it supports 1st, 2nd and 3rd Gen AMD region processors,

It is also lightweight, and its RGB lights are very good, which you can also control, in this, you can also use Ryzen 9 (AM4) processor, which is the latest processor from Ryzen and is very heavy, Its Graphics Card interface is PCI–E,

So, friends, this was a list of the best motherboards under 10000 from our side, and a detailed review, I hope that you must have liked this list and if you want to buy any of these motherboards, then you can buy them from the given by using the link.,

and if you find any problem with this list, then you must tell us by commenting so that we can help and try to improve our blog more, this list has been made after a lot of research, and after that, this perfect list has come in front of you. , none of these motherboards will let you disappoint.

With this, this list ends, if you like to see reviews of tech gadgets, then you must visit our blog because we bring such tech-related articles for you daily, we will meet with another similar post. till then buy and take care.