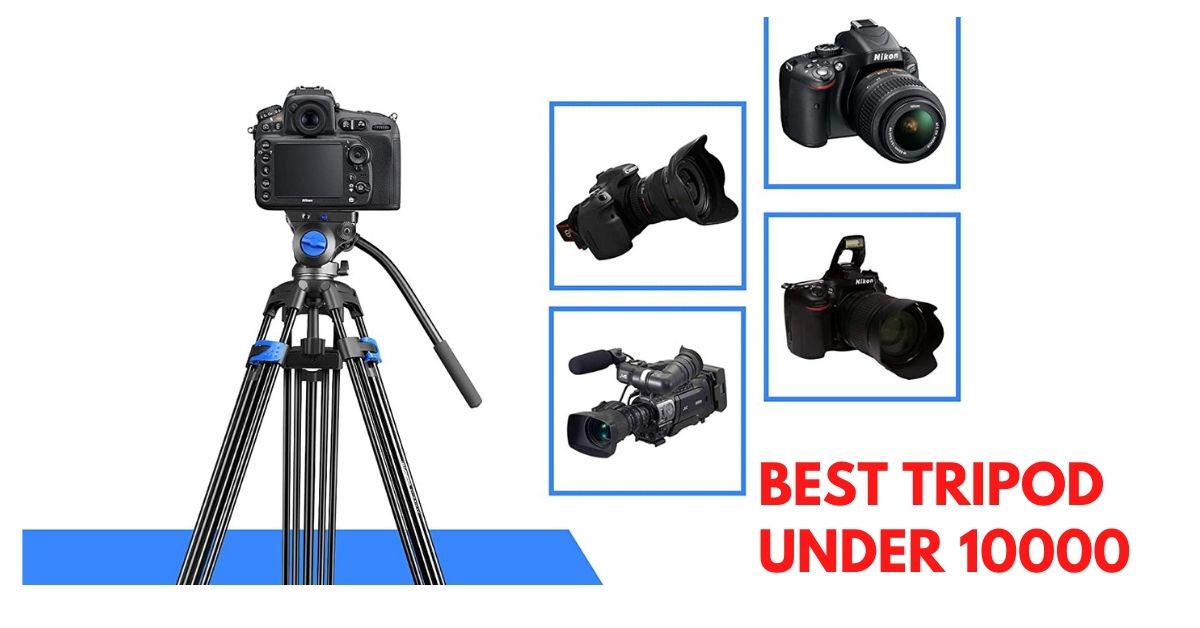 Hello friends, how are you guys, I hope everyone will be well, friends, as you guys are seeing, how much the trend of online education and videos has increased due to covid-19, and with this new YouTube Career options are visible on other platforms as well,

and so if you also want to become a video influencer or a youtube, then the quality of your videos must be good, and you know, along with the camera in increasing the quality of videos. It is very important to have a good tripod too.

So guise so if you are also looking for a good tripod, which can hold your camera or smartphone very well and has more capacity, and you can spend around 10000 for a professional tripod so stay tuned with today’s post because today we are going to talk about the best tripod under 10000 in India,

and friends, you can get a very good tripod at this price point, which will meet all your demands. could do, and that’s why we have included all the tripods in today’s list are very good.

Friends, we will also review all the tripods and try to give you good advice, so let’s first look at the things that are common in all the tripods, through the table, then we will start the list.

Common things in all Best tripod under 10000

So let’s start the list of Best tripods under 10000

More about the Benro iTrip IT15 tripod

guys this tripod comes on our list on number 5, Benro iTrip IT15, and it is a very good tripod, which can work both as a selfie stick and tripod, and that’s why it is on our list of tripods, friends If we talk about its look and design, then it is very good in appearance,

And it is also very strong because hard plastic and a lot of aluminum have been used in designing its whole body, which also makes it very durable, friends, three legs have been given to this tripod, which you can use. It can also be folded, and after folding it becomes very small, which makes it very easy to carry,

and it opens completely in 4 steps, after which its height becomes 1475 mm, which is a very good height for a tripod like this, and can lift weights to 4kg which is very good.

Friends, the type of its head is a ball head, which makes it a monopod, and you can easily hold any camera with it, and due to the ball head, you can rotate it 360 deg anywhere, For this, a very small handle has also been given in it, and friends,

its best feature is that it can also become a selfie stick, for this only you have to detach its legs, and after that, it becomes a selfie stick. It goes, which is a very good thing, and you can also hold the DSLR camera with this tripod after it became a selfie stick

More about the E-Image EI-7050-AA tripod

friends this tripod comes from the E-image company which is a very good company of tripods and other gadgets, and it is a very good tripod if we talk about its look and design, then it is also very nice and cool to look at, as you guys can see and a lot of metal and a little hard plastic have been used in the design of its entire body,

which makes it very strong and durable as well, and its weight is 4 kg which is very good according to its design, so you can carry it easily anywhere, its legs are very strong, and you can also lock them.

And for this, you have been given small locks on the lower side of this tripod, and some steps have been given in it to fold it, and after folding, its length is greatly reduced, and its maximum height is 6 feet. The key is made, which becomes a very good height,

its head type for a tripod is a Fluid head so that you can attach any camera with it, and this head also rotates 360 degrees, To control it, the handle has been given in it, and it also tilts up to 45 degrees up and down both directions

Friends, it can hold up to 5 kg of weight, which is quite a lot, and a bag has also been given with it to carry it, whose quality is very good so that you can keep it tight, its color is black

More about the Osaka EI717X tripod

Friends, now the tripod we are going to talk about has been designed by the Osaka company, and this tripod comes with a lot of features, to make it look very professional,

it has a lot of high–quality metal and hard plastic. It has been used, and at the same time it has been painted with black color, which looks very good, and it is also very strong, you can use it for shooting heavy videos because it can hold any full camera. can do, and it is also used in shooting movies

With which you can get an idea about its quality and features, how good it is, friends, even if you have to travel a lot like a vlogger, you can still buy this tripod, because its weight is only 4 kg which makes it very portable and lightweight as well so that you can take it anywhere easily if we talk about its features,

then it has many features, as there are 3 rods have been used in its legs, which contributes a lot to its strength and durability, and you can also fold it, for which 3 locks have been given in it,

Which makes it quite stable, and it is made of plastic, and after opening it completely, its height becomes more than 6 feet, which is a very good thing, and it is a sufficient height for any type of video, it has a hydraulic head has been used so that it can hold any heavy DSLR camera,

and its holding capacity is about 10-12 kg, which is very high so that you can also use a red or blue camera with it. and to control this head, for this thing, many handles and controls have also been given in vlogging tripod.

More about the Sirui ET-1004 tripod

Friends, this tripod is ranked at number 2 position in this list, which is named Sirui ET-1004 Tripod it is also a very good tripod for the camera and you can also use it for recording heavy and action-type videos or reels as well. Its look and design are also very good,

and its body is made of hard plastic and a lot of metal, which makes it very strong, it has 3 legs, and also a small hanger in the middle In which you can hang something, and it is also quite stable.

Because very thick rubber has been used under its legs, which is a very good thing, it is made of aluminum, which makes it strong as well as very lightweight, its weight is only 1 KG so that you can buy it. You can easily carry it anywhere,

and there is also a case with it, in which you can keep it, friends, the type of head is a ball head, which makes it much easier to control, and because of this, you can use it in any way. It can also be rotated up to 360 deg in any direction, also it can tilt towards the subside up to 60 deg and 60 deg towards down which is very good for close rang video recording.

Friends, this small-looking tripod can hold up to 5 kg of weight, which is quite a lot, and due to the support of the Flip Lock Leg system, you can also fold it, and after folding it is much smaller. It becomes, and if you open it completely, then its height becomes up to 4-5 feet,

which is enough for an action shoot tripod, and friends, the hanger on the bottom side of it like this It is designed so that you can also hold one more camera in it, which is its best feature.

More about the DIGITEK® (DPTR-610VD) tripod

Friends, now we have come to the number tripod on this list, for which you were waiting more, and friend, the number 1 tripod in our list is DIGITEK® (DPTR-610VD) and it is a very heavy and professional tripod, Which you can use for any purpose,

it will not disappoint you because it has a lot of features, and it is also the best-looking tripod on our list, as you guys can see, I liked the color combination which is blue and black, which makes it very good-looking tripod.

Friends, apart from looking good, it is also very strong, because, in its design, pipes made of metal were used in the design, which is the best model to design the body of a tripod, and this also makes it very durable. Yes, plastic has also been used in some places,

which is a very good thing, and if we talk about its weight then it is also quite lightweight because its weight is only 4kg 500 grams, which makes it very becomes portable, and friends, it can hold up to 20 kg of weight.

Which is the most, and you can easily hold any big or small camera with it without any problem, and it is also very stable because rubber has been used under its legs, so that if you are a blogger, and if you have to hold the room in very different positions, then you can buy it, and a hanger has also been given in it, friends, 3 steps have been given in it to fold it,

And it is very easy to fold or open it, after folding its height becomes just 870 mm which is too good and its max-height is 2000mm and it is also very much.

Friends, the best and most important part of this is its head which is 3 way Adjustable Pan Head, and it is also very strong, it is also easy to control, for this it has been provided with a handle, and some small controllers There is also so that you can control it easily, and it can also rotate up to 360 deg and it can move up to 45 deg on both sides up or down,

So friends, how did you like this list of tripods, do tell us by commenting, I hope you must have liked this list, and if you see any problem in this list of ours, or if you think that someone in this list There should have been more tripods, which we missed,

then definitely tell us by commenting so that we can help and we can improve our blog more, if you want to buy any of these tripods, then you can use the given link With the help of Amazon, you can buy them by going to Amazon because all these tripods taken from Amazon

Friend, thank you very much for reading this article and for visiting our blog, and if you like to see reviews of such gadgets, then you must visit this blog because we keep posting such content.